Medicago is a genus of flowering plants, commonly known as medick or burclover, in the legume family (Fabaceae). It contains at least 87 species and is distributed mainly around the Mediterranean basin. The best-known member of the genus is alfalfa (M. sativa), an important forage crop, and the genus name is based on the Latin name for that plant, medica, from Greek: μηδική (πόα) Median (grass). Most members of the genus are low, creeping herbs, resembling clover, but with burs (hence the common name). However, alfalfa grows to a height of 1 meter, and tree medick (M. arborea) is a shrub. Members of the genus are known to produce bioactive compounds such as medicarpin (a flavonoid) and medicagenic acid (a triterpenoid saponin). Chromosome numbers in Medicago range from 2n = 14 to 48. The species Medicago truncatula is a model legume due to its relatively small stature, small genome (450–500 Mbp), short generation time (about 3 months), and ability to reproduce both by outcrossing and selfing. 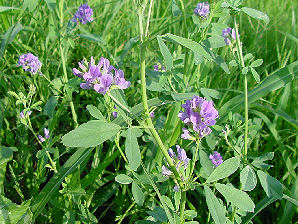 Alfalfa, also called lucerne and called Medicago sativa in binomial nomenclature, is a perennial flowering plant in the legume family Fabaceae. It is cultivated as an important forage crop in many countries around the world. It is used for grazing, hay, and silage, as well as a green manure and cover crop. The name alfalfa is used in North America. The name lucerne is the more commonly used name in the United Kingdom, South Africa, Australia, and New Zealand.

No resources are currently listed for Medicago sativa 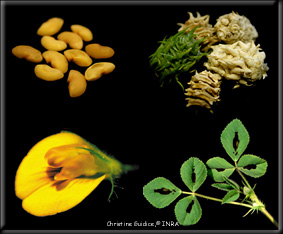 Highly nutritious forage legume with global distribution, widely consumed by livestock and also used as a vegetable in China.