Lotus, a latinization of Greek lōtos (λωτός), is a genus of flowering plants that includes most bird's-foot trefoils (also known as bacon-and-eggs) and deervetches and contains many dozens of species distributed worldwide. Depending on the taxonomic authority, roughly between 70 and 150 are accepted. Lotus is a genus of legumes and its members are adapted to a wide range of habitats, from coastal environments to high altitudes. 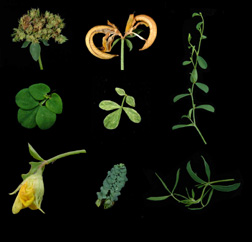 Lotus japonicus, a forage crop (much like clover), is widely used as a model in legume biology. It is physically small in stature, with a small genome, and a short generation time, and it is relatively easily transformable (for gene functional studies). Genome version available on LIS is version Lj2.5 and Lj3.0, publication associated with this genome version is available here: Sato et al., 2008 (doi:10.1093/dnares/dsn008).

MG20 (Miyakojima, Japan)
Lotus japonicus ecotype Miyakojima (MG-20) was identified as an early-flowering accession, with traits that distinguish it from other Japanese accessions: low concentrations of anthocyanin in the stem and petals, few trichomes, a more upright habit, broad leaflets and petals, and large black seeds (Pajuelo and Stougaard, 2005, in: A.J. Marquez (ed.), Lotus japonicus Hadbook, pp. 3-24).
No resources are currently listed for accession MG20.