Cicer is a genus of the legume family, Fabaceae, and the only genus found in tribe Cicereae. It is included within the IRLC, and its native distribution is across the Middle East and Asia. Its best-known and only domesticated member is Cicer arietinum, the chickpea. 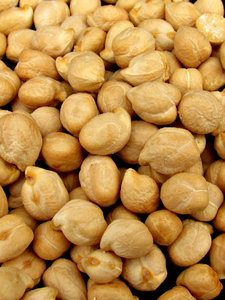 Chickpea (Cicer arietinum) is a legume species in the group of 'cool-season' legumes, along with lentil, pea, faba bean and clovers. Chickpea is one of the earliest cultivated legumes: 7,500-year-old remains have been found in the Middle East. Other common names for the species include garbanzo bean, ceci bean, sanagalu, chana and Bengal gram. There to are two main types of cultivated chickpeas based on seed morphology, desi and kabuli. The desi type of chickpea consists of seeds with a yellow interior but have a thick, wrinkled and dark seed coat, the seeds are approximately 6 to 7 mm in size. The majority of desi chickpeas are split in half to make Chana Dahl. Whereas, the kabuli type of chickpea are lighter in color, have a smooth seed coat and about 8 to 9 mm in size. The kabuli type of chickpeas are the most common type found in America.

No resources are currently listed for Cicer arietinum