Apios is a genus of flowering plants in the legume family, Fabaceae. It belongs to the subfamily Faboideae. Its member species are found in North America and Asia between latitudes of 50° and 20°. The term Apios comes from the Greek word for pear and may refer the pear shape of some tubers. Several members of this genus are known to have edible, tuberous roots. 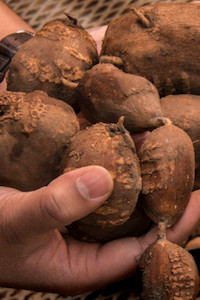 Potato bean (Apios americana) produces starchy, high-protein tubers that were used by indigenous Native Americans. Apios americana is found throughout eastern and central North America, from Louisiana in the south to Quebec in the north. A breeding program was begun in the 1980s by Dr. Bill Blackmon and Berthal Reynolds with the goal of creating a more marketable domesticated tuber.

No resources are currently listed for Apios americana